This article was specially written for the third Blog Carnival, I hope everyone enjoys this post as it has been a work in progress I must confess for a couple of months. Research for this has been so much fun and I look forward to seeing what everyone thinks of this piece.

As a lover and writer of fanfiction I know that fanfiction is one of those things within a fandom that can divide fans of any medium. Some like myself love it, as it opens our favorite worlds to new possibilities and adventures and then there are those who think fanfiction is the bane of the fandom and bastardizes that which they love. Which ever side you are on there is no doubt that as long as there are fandoms there will be fanfiction and also I will try and make this as unbiased as possible, but that might be harder said than actually done.

Fanfiction is a way we can further immerse ourselves into the worlds we love as well as expand and shape those worlds into something new. One of the earliest fandoms ‘Sherlock Holmes’ had fans that did not like the way the stories came to an end with the death of the detective. Some hardcore fans even wore black to mourn the death of their favorite detective and others wrote their own stories to continue the fandom on, in a way we can even see this continued today with new iterations of the Sherlock story with series such as BBC’s Sherlock and the under rated in my opinion cartoon series Sherlock Holmes in the 22nd Century. Both of these series and even Elementary and the recent Sherlock Holmes movies from Hollywood can be seen as fan works and so to a certain extent can be seen as their own form of fanfiction. 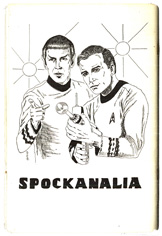 The next big move for fanfiction in the west came in the 1970’s and this came in the form of the fans of a still popular series around the world. I am of course talking about Star Trek! One of the first shared collection of fanfiction came in the form of the Star Trek fanzine ‘Spockanalia’. Here we had a collection of fanart and fanfiction written and collected by fans for fans. But this sharing of fanfiction was not the only big thing with the fanfiction that came from the Star Trek fandom. Western fanfiction readers and writers also wrote and shared the first ‘slash’ fanfiction, and in a time like the 70’s where homosexuality was seen by many as a mental disease that needed to be cured by either church or therapy the sharing of such stories would let fans partake in an almost taboo subject. Nowadays no one would bat an eyelash at the very idea of homo erotic fanfiction involving characters like Spock and Kirk in fact these kind of stories are almost expected when one talks about fanfiction. People expect erotica but that is not all there is as I will get into later.

It would however not be till the rise of the internet that we would see a real boom in the fanfiction community and in 1998 the first ever fanfiction community was born online and still runs strong today, I am of course talking about Fanfiction.net. This for many people like myself and many still today would be our introduction to the world of fanfiction within our fandoms.

Fanfiction was my introduction to the yaoi genre through fanfictions of series such as Pokemon, Dragonball Z, Ultimate Muscle and of course the Naruto fandom.

Fanfiction has been a part of the anime fandom since I became a member of it in my late teens and as I come to the end of my twenties (god typing that makes me feel old) it is still a part of it for me. When an anime series comes to an end or I’m just waiting for the latest ep to come out or to save up for that next boxset fanfiction keeps my interest in the fandom and even gives me a way to communicate with other fans within the fandom. I cannot even begin to tell you about all the friends and acquaintances I have made throughout the years thanks to reading and writing fanfiction.

Fanfiction however can do more to a fandom than give it’s fans freedom, in of it own it can create it’s very own fandom within a fandom. Two examples that come to mind for me is one the yaoi side of any fandom which I know not every fan of a certain fandom will be  fan of yaoi within there fandom, after all this is probably why a lot of fanfiction websites these days have separate sections for yaoi stories. This is especially true for larger fandoms like Pokemon, Digimon, Dragonball Z and Naruto on many fanfiction sites.

Another interesting case of a fandom born of a fanfiction comes within of all places the ‘My Little Pony: Friendship is Magic’ community with a certain fanfiction simply titled Fallout Equestria. This one fanfiction has spawned so much within it’s own fandom. Spin-off stories by other authors that are as long as any best selling novel, music, art and animation. This one story has shaped its own fandom and that is just a perfect example of why fanfiction is so amazing.

That being said I know that within any fandom there are and will be purest of the source material and will hate anything that breaks the status quo of their favorite show, movie or otherwise. When it comes to people like this the sad fact is that they like everyone else in any fandom are allowed their own opinion on a subject. We cannot force them to love fanfiction just as they cannot force us to stop writing the stories we would love to see.

On a closing note to this piece I suppose I cannot talk about fanfiction without bringing up a recent and in my own opinion literary atrocity ’50 Shades of Grey’. I do not have the time or the patients at the moment as to go in why I hate this series of ‘novels’ so much, but I will give props to the writer where they are due, after all 50 Shades started as nothing more than Twilight fanfiction…

20 thoughts on “A Brief History of Fanfiction”