This one is going to have to go to one of the first yaoi anime to make me cry, but even saying that just picking one scene as the saddest is hard as Zetsuai / Bronze is one giant kleenax moment for me. I could have gone with the truck accident scene or the confession scene at the end of the first OVA or even the back story of Takuto Izumi. 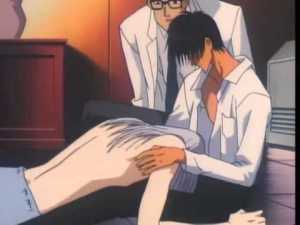 But in the end I had to go with the hospital scene from the second anime when Takuto is planning on saying his final goodbye to Koji. Up until this point he had been putting his life on hold waiting for Koji to wake up,  life around him moved on and he wanted to move forward as well so he decides to in his words ‘wash his hands of responsibility’ what happens next is a heart wrenching goodbye that is silenced by Koji awaking from his coma begging Izumi not to go, but the real tear jerking of this moment is when the doctors tell Izumi that Koji has lost his voice. Izumi wanted to hear those words of love so much that he thought he heard them when Koji awoken. This scene brought me to tears.