The second anime everyone was talking about before the beginning of the season was, of course, My Hero Academia season 2, especially with how popular the first season was just last year. As I have stated before this was the anime that has brought me back into the shounen genre mainly because I love superhero stories. The fact that one of my favorite animes is Tiger and Bunny should be proof enough of that.

If the last season was the beginning of Midori’s journey to become the hero he wants to be then I would definitely say this season has brought us to the moment of when he has to prove not only to himself that he can and will be that hero but also to prove to the world he is ready to take that mantle of the hero! Then I see how that is going to happen and I must admit there was a part of me that inwardly cringed but at the same time I should not be surprised as this is shounen series. We are getting a tournament arc. 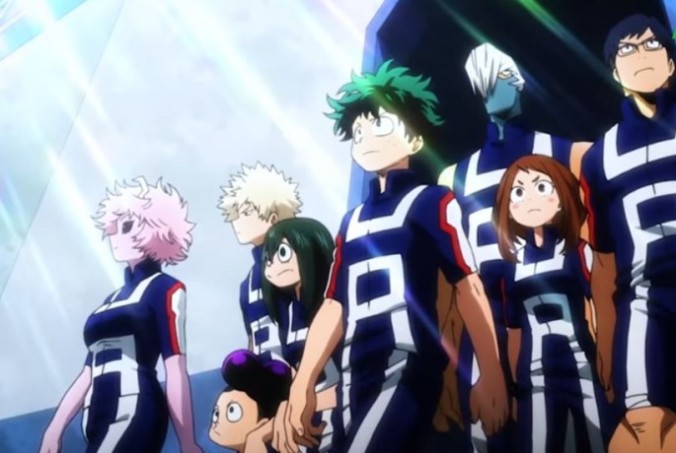 Don’t get me wrong this, of course, makes sense for the story, it is just I myself am not a fan of the tournament arc and it is part of the reason I stopped watching the genre. I find these kinds of arcs predictable and a lot of this has to do with the dreaded plot armor of the main character. It takes away the suspense of each battle for me and in the back of my mind I have the constant thought, this is cool and all but the main character is going to win right? Of course, this is not always the case with all series of this kind and a tournament arc can be fun in fact I think the most enjoyable tournament arc I have seen is the second season of Food Wars.

Still, My Hero Academia is still as entertaining for me so far as it was for me in the first season, so I will definitely be watching this one each week. With all the negativity in the news lately watching something like this will always brighten my mood and perhaps even help me forget for a moment, the world is pretty fucked up at the moment.

Afterthought: Note to self, do not watch this series while other people in the house are sleeping, I got so excited watching the latest ep I kind of woke someone up.