“A man could not fly without dreams, but a man who never flew never knew the fear of falling.”

Ai No Kusabi The Space Between Us Vol. 1 Strangers 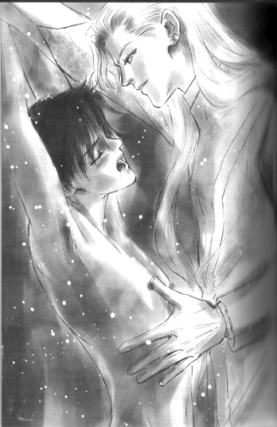 At its very core, the light novel series that is Ai no Kussabi by Rieko Yoshihara covers three themes in a broad spectrum that I hope to explain to the best of my ability with this analysis and review piece.

These themes are as followed; Restraint, release, and survival. Throughout the winding maze-like path of the plot within this light novel series, these three themes intermingle into a tale of obsession, hate, love, and freedom that create a labyrinth of emotion within the pages that will draw any yaoi lover in.

The first book in the series is titled ‘Strangers’ and this title fits perfectly as it is our the first introduction to the cities of Ceres and Midas and we as a reader are a stranger in this world that is Amoi. There are people in this world like our own. The reader will recognize personality types and tendencies in characters that make them relatable but as more of the world is revealed to us the more of a stranger to this world you will feel, and by the end of the first novel, I guarantee you will be invested in the story of this world. Like a tourist visiting another country, you discover not only the new around you but also can have a moment of self-discovery on the adventure within. This just shows a true skill in writing that Rieko Yoshihara has. Words are transformed into a world of characters that we grow a bond to for this is the goal of any author.

As I stated in my review for Killing Stalking there is darkness in our own world, an almost open secret that we try to protect those around ourselves from. Think of it this way, like a rating system for a game or movie there are themes that can only be explored when a story has a higher age rating. There are stories in this world we don’t want to share with a younger audience until they are at an age where they can properly comprehend and understand, so we use something like censorship to protect those young minds. Instead of the cruelty of the world being an open secret in Midas it is no longer a secret. On the borders of this corrupt neon, paradise lies the slums the stomping ground and longtime home of Riki one of the titular ‘heroes’ of this tale a man that grew up in a world where that cruelty was upon him from the very beginning.

Riki is a wild beast of the slums fighting to survive in a world that constantly kicks him down face first into the pavement again and again and again, but every time Riki will stand up again. He is bloodied, bruised and broken but he always gets up. Riki’s story for us, however, does not start in the slum where he runs free. It starts with Riki alone in air-conditioned darkness restrained and begging his captor for release, for Riki is being punished by his master.

The world in which Riki stands beside Iason is far different than the one he has come from even if they are geographical neighbors. In the slums pride kept Riki going but where he ends up with Iason pride is a restraint he must let go of only then can explore a new side to himself and the world.

Iason is almost the complete opposite of Riki, brought up in a world of glamour and luxury on the surface he has had a perfect life, but like Riki, he does not quite fit in with those around him. He finds his own life mundane and boring until he takes an interest to a mongrel on the streets. Iason’s curiosity turns to an obsession to tame this wild beast and in becoming Iason’s pet Riki get’s a chance for what he has wanted all his life, a way out of the slums. Their lives could not be more juxtaposed and when obsession turns to something more the tale between Iason and Riki truly begins as they fight to understand not only each other but their own world, and that does not even scratch the surface of this tale.

Gang warfare, politics, discoveries of sexual desires, betrayal from all sides and more lay within the volumes of Ai no Kusabi and with each new chapter, you will learn more about the world and more often than not this will raise more questions as to what is ahead for the characters within. This series is a must-read for anyone who calls themselves a yaoi fan, after all, it is not a classic of the genre for no reason.

My Thought’s on Taming Riki and Why You Should Not Buy It!

On an important side note of my review of the Ai no Kusabi light novel series I feel I should bring up a subject matter that needs to be brought up when talking about the series.

Advertised as a prequel to the series Taming Riki is not an official work of the series and is nothing more than a badly written fanfiction. This is one fanfiction I do not recommend because not only is it in no way affiliated with the original creator of the series Rieko Yoshihara, but many fans of the series have spent money to read this story, thinking they are supporting the series. If you must read it and I don’t recommend it find somewhere you can download it for free and do not under any circumstances pay money for this work. As far as writing quality goes I put this on the same level as 50 Shades of Grey.

I support all fanfic writers as it has been shown throughout this blog, however, I do not approve of making money off the fans of a franchise with fanfiction. If you do want to publish your own story for profit, use your own settings, characters and story do not piggyback on the success of someone else’s story of the fandom around that story for financial gain.