If something is declared by the greater masses to be a masterpiece, does that mean that you have to find enjoyment in it? Of course not. Enjoyment of any sort of media will always come down to personal taste and this is a subject I have written about before on this blog, though that was ages ago. In my post What defines a ‘Guilty Pleasure’?, I discussed my own history with watching Adult Swim as well as how different opinions on a show can define whether or not a show could be classed as a guilty pleasure to someone while to others a masterpiece. I bring up this post because I can understand why so many people love Devilman Crybaby, but for me at best I can call it a guilty pleasure or at least I would have up until the ending of the series, the last few episodes left me hating the series, but I am going to start at the beginning of my journey for Deviman Crybaby and tell you why I ended up hating what is considered by so many in the anime community as a modern masterpiece.

My journey with Devilman Crybaby started with the hype for the series that began almost as soon as the series started on Netflix in January of 2018. Everyone in the anime community was going on and on about Devilman Crybaby and how awesome of an anime it was and how different it was from anything before. There was some excitement around the net as well before it was even released solely because of who the director of the series was, Masaaki Yuasa. The only other works I have seen by this director are Kaiba, which I dropped after the fourth episode and Ping Pong the animation, which I loved so at the news that he was directing the series I was on the fence. It would not be until August that I would sit down and watch Devilman Crybaby as I had yet to set up a Netflix account.

It was a want to watch The Little Prince among other movies that I finally decided to set up an account and Devilman Crybaby was the first series I binged watched in two sittings. If I had enjoyed the series I probably could have finished it in one sitting but well… I needed a break at the halfway point. By the end of the first episode, I came to realize I was not going to enjoy this series and a big part of that came down to the characters, none of them I found likable. They were either dense fucking idiots or snide little assholes and this description especially goes to the two leads Akira and Ryou. Which is ironic because in both the manga and the 1972 anime series I enjoyed both characters. They had a camp charm to them, but here as I said I just found both of them extremely unlikable. Ryou was so stereotypically ‘evil’ and such an obvious manipulator that his character lacked any of the charms he had in the manga and the lack of charm from Ryou made Akira’s trust and faith in his ‘best friend’ make him look like a gullible idiot at best. It is because of this lackluster character dynamic between the two that the reveal at the end of the series of Ryou being the main villain just seemed to have next to no impact what so ever. 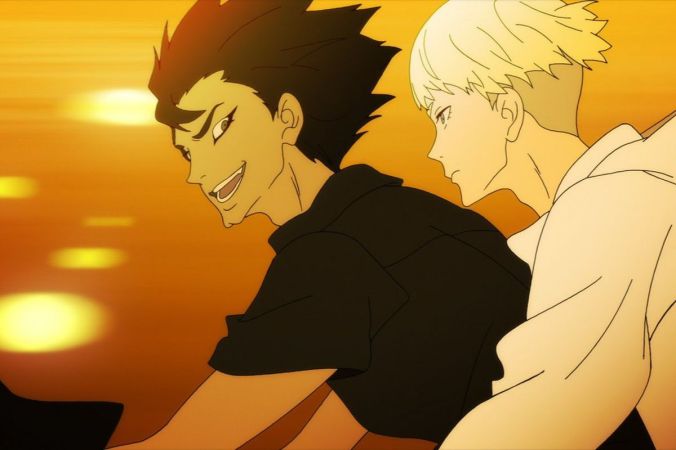 One of the biggest draws for me when I first read the Devilman manga was the relationship between Akira and Ryou, where when watching Devilman Crybaby there is next to no chemistry between the characters. To the point where I do not even want to Ship the two of them!

My biggest issue however with the series is the pacing throughout the episodes, I found it to be just all over the place, there were several seemingly unimportant scenes where the story just seemed to drag on and it became a bore to watch and then at other times scenes felt so rushed that they lacked any impact that they were supposed to have. The worse of the scenes to have no impact was the episode where Akira’s parents show up and are killed. Throughout the series, we are told what good people Akira’s parents are but we don’t see any of this, we the audience are just told. Then when we do finally see them they are on screen for a few minutes and then are massacred by a monster and because they are Akira’s parents we are supposed to sympathize with Akira for the tough decision he has to make in ‘killing’ them a second time? It’s almost like the writing behind this is ‘oh the audience with sympathize because he has to do this to his parents’ it’s a cheap tactic to get audience sympathy at best, like writing a story about a dying child. Of course, you are going to feel sad, it’s a child dying so, of course, you are going to feel sorry for Akira having to do that to his parents, after all, they are his parents and we don’t have to worry about giving them any character development.

Then there is the ending, it felt like a rushed mess and by the end of it all I had just had enough and was so happy it was finally over, of course, I sat down and watched the whole series two more times to try and understand why so many others loved this series. I also read countless reviews and watched countless videos on Youtube praising the series. One of the biggest compliments I saw the series being given is the themes it explores but to me the themes it did try to cover felt like they were just scratching the surface. At the end of the day, I just had to come to the conclusion that this masterpiece of anime that everyone was loving was to me at least just garbage. Maybe I could have enjoyed it more if I had not read the original manga last year but who really knows.

One thought on “Why I HATED Devilman Crybaby”