Every single year without fail, since I bought my copy of V for Vendetta on DVD on November the fifth no matter what I am going through I will put this movie on, because the message of this movie is something that still stands strong with me. The following post is not a review of the movie, at this point I do not think I could write an unbias review of the movie because of how ingrain the movie is within me at this point. Instead, I want this to be a discussion of the movie and what it means to me.

There are two comic book movies in my top ten favorite movies of all time, or at least they would be there if I ever made the list. These movies are Watchmen and V for Vendetta. Don’t get me wrong I love a good comic book action movie but these two movies stand out the most to me because they speak to me on more than an enjoyment level. They make me think. In Watchmen and spoilers ahead if you have not seen the movie we get a story asking one simple question. Who polices the police? Are those who protect really as righteous as we believe them to be? Do they deserve to be placed up high on the pedestals we put them on? And lastly, does the world really end if the bad guy wins? V for Vendetta has a similar message with its story in that it asks the question, can a villain be the hero we need? 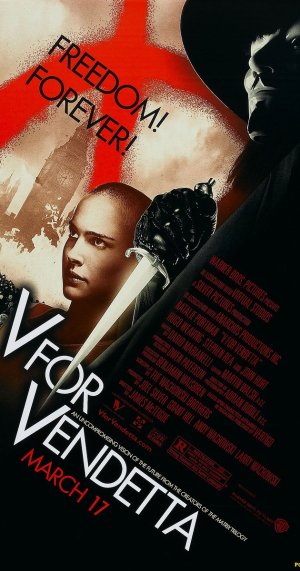 V for Vendetta is a movie that there is in no way in hell would get made today. There is no way a comic movie would be made in the post 9/11 world that glorifies a terrorist as a visionary, a hero or a savior for the people. Especially in this world that we have created for ourselves today. We have created a world in the past decade where people do not stand up and question, without the approval of masses in some way, shape or form and we are creating a world and generation that is full of wimps and wusses who want to see change in the world around them, for the simple fact that they want a world where their little feelings do no get hurt.

The story found within the movie for V for Vendetta has a message that to me has more value today in 2018 than it ever did back in 2005. The citizens in the England depicted in V live in a world where the news lies to them (hmm sounds kinda like this fake news we keep hearing about today, does it not?) a government that the people are scared of because there is a madman in charge (you can pick from many different countries around the world to see the similarities here) and those who speak up and try to initiate change well it turns out they are not the kind of people you should idolize, in fact, they are criminals whose own moral judgment is far from perfect.

‘Artists use lies, to tell the truth’. These seven words in this very sequence speak to me on so many levels, countless times within this blog I have written review after review after review of stories with hard subject matter to swallow. Stories that deal with abuse, rape, torture and so much more of the harshness found in this world and though none of these stories to my knowledge have been ‘true stories’ and therefore could in a sense like all fiction be considered a lie for the sake of entertainment, there is a level of truth to these stories and the writers behind these ‘lies’ are sharing truths of this world with the reader. They are giving us the opportunity to talk about these otherwise taboo or unreachable subjects in everyday conversation. In fact the latest chapters of Killing Stalking has opened up a chance to talk about another form of abuse that is very rarely talked about and you can be sure I will be talking about it here soon, though I am going to wait till the end of the current season before I open that brand new floodgate as I am very curious as to where Koogi is taking the story.